How to Tag Sharks

The following information has been taken from the NMFS Cooperative Shark Tagging Program Instruction Booklet and adapted for land-based shark fishing.

Please become familiar with tagging equipment and the information data card before they are actually needed.

Have tagging equipment handy; know who is going to do what in the process of catching, tagging and releasing the shark, and who will concentrate on obtaining biological information for recording on the data cards.

Safety Is The Vital Element In Planning

Cut the leader rather than try to retrieve the hook. Even under the best conditions, every new interaction with a wild animal adds some new hazard. The most dangerous one in shark fishing can be an uninformed guest who is trying to help.

Capitalize On Your Experience

Tagging a shark, especially larger ones, is a team effort that requires practice. With an inexperienced crew, you should handle the tagging pole or the leader, not the rod. The angler has the least freedom of action at the most critical time. Tournament rules allow for the angler to hand off the rod at this point.

Set the Hook Before It Is Swallowed

The tagging program has never had a recapture from a gut hooked shark. Alertness for the strike is in important consideration and should be practiced at all times.

Do Not 'Over Fight' The Fish

Sharks fought to complete exhaustion are less likely to survive. However, the shark should be sufficiently played out to permit tagging without having to restrain it for too long.

Sharks are highly susceptible to internal injury. Avoid gaffs and restraining devices and prevent the shark from thrashing on shore more than necessary. The larger sharks are least likely to survive rough treatment.

Look For Tags Already In Place

Remove the existing tag by simply cutting the trailing leader attached to the capsule and insert a new tag, if available. Record the old tag number BEFORE opening the capsule. Read the vinyl message and carefully report all recapture details to tournament officials.

Tag Only Sharks That You Can Identify

Become familiar with the species you are likely to encounter when and where you are fishing. Some species are difficult to tell apart, but it is important that you records are as accurate as you can make them. If you are not sure if the shark was, for example, a dusky or a sandbar, then note this on the card.

Over-anxiousness is the major reason for poor placement of tags. Give the fish a few moments to settle down. VERY IMPORTANT: The dart head fits loosely into the slotted point in the needle, and the entire tag is HELD IN PLACE BY RUBBER BANDS 2" to 3" up on the applicator. The dart head is curved so that the two rear points will face DOWNWARD into the muscle when the tag is inserted. 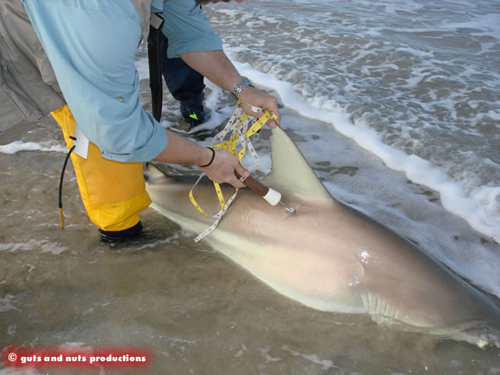 Tags should be driven into the back near the first dorsal fin. The area lies to the side of the backbone and above the body cavity. The ideal location on large sharks is in the muscle at the very base of the first dorsal fin. IT IS MOST IMPORTANT THAT THE CAPSULE ASSUMES A TRAILING POSITION on the shark. Insert the dart at an angle toward the head end of the fish (see photo to the right).

Large Sharks: The skin of a large shark is well known for its toughness, but by making a strong, quick, angular thrust, the dart should penetrate even large individuals. When the tag is correctly inserted, the dart head will come to rest approximately 1" to 1.5" beneath the skin. When fishing from shore, such as in this tournament, the tagging needle will be mounted in a short handles dowel. CARE MUST BE TAKEN TO AVOID INJURY TO THE BACKBONE. To control the depth of penetration of the dart head, an incision can be made with a pointed knife and the dart head then carefully forced into the muscle.

The demand for physical action in the final moments when a shark is being tagged and /or measured can distract one's attention from pertinent details. Several people may assist in a release only to learn later that no one truly focused on the size or sex of the shark. Discuss measurements and sex before the shark is released.

Please fill in the tagging data card immediately after tagging the fish. The photo below is an actual example of completed and submitted data card 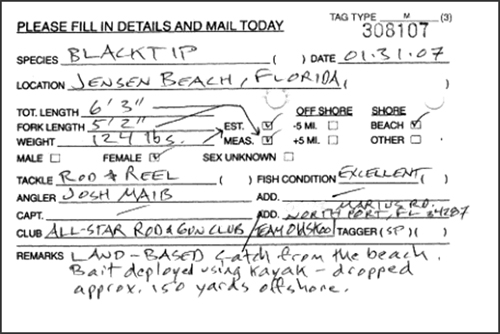