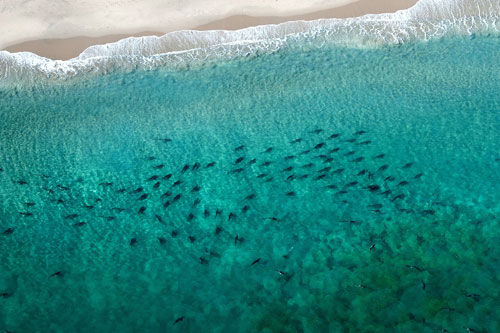 Every year, just as fall turns into winter, Florida's east coast experiences a massive migration of sharks from the North. The dominant species of these migratory sharks are blacktip and spinner sharks, but other large predators follow this annual migratory pattern, including: hammerheads and bull sharks. This migration begins in the early winter months (December & January), and peaks around late-January and continues throughout February into March. These large schools of sharks can be numbered in the 1000's and remain in Florida until April, when they begin their return to the North. Every winter, these large schools of sharks flock to Florida's beaches and just like in Steven Spielberg's box office hit, Jaws, local authorities close the beaches, due to unsafe swimming conditions. These large congregations of sharks are not being attracted to the beaches by any feeding behavior, but instead are following an annual migratory mating behavior.

During these migratory winter months, Florida's oceanic food chain experiences a large increase in competition for food. Although these large schools of blacktip and spinner sharks dominate the coastal food chain, they remain subject to their own fate. Large hammerheads and bull sharks follow these congregations of blacktips and spinners as their yearly food source. Although many would consider these blacktips and spinner sharks as large sharks (Average size being between 5-7ft), it is not uncommon to see a 13ft hammerhead with a six foot blacktip in its mouth.